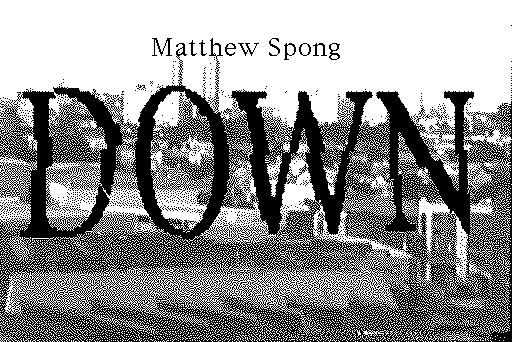 DOWN is fantasy/magic realism. The story opens in the ancient city of Levinfield, home of a civilization so old that their libraries collapse beneath the weight of their books, where the monetary system is based on poetry and . History follows a regular cycle, from industrial peak to decadent trough and back again, and the city is now in the middle of a quiet era of contented peace. Few people leave the city, as all their needs are catered for by the leftovers from the last industrial age, the automated Factories which can manufacture anything required and the antique mines where fossilized machines are dug from beneath the ruins.

Lang, however, has been reading. In the libraries he uncovers references to a great forest to the West, and a desire stirs in him to explore, leave the safe streets and venture out into the deserted countryside.

One legend in particular catches his interest. In the last days of the previous Industrial Age a truckdriver disappeared while passing through the forest on his way to the outlying villas of the rich Factory-owners. Since then his ghost was said to haunt the road, ceaselessly searching for a way out, a pale wraith in white tee-shirt and navy shorts, wandering through the trees crying "Map! Maaap!", searching for directions. Lang vows to track the ghost down and lay it to rest.

His friends try and prevent him leaving. Subconsciously they fear he is the first sign of the next aggressive wave of greed, desire and development. But he is determined. He readies his rusted trailbike, acquires a longbow for protection, and sets out.

Deep in the heart of the forest, in a castle that for millennia lay buried beneath the mold, Catherine toils obsessively at her life's work. She is a descendant of the Factory-owners of old, run-away from her parents crumbling villa to the West of the forest. She records on tape the words spoken by parrots that nest in the trees - words of a forgotten language of great power. Passed down through generations of birds, this language, (when the words are spoken in the right order), can harness strong magical energy. Catherine records and catalogues and files the words of power and never really knows why.

As Lang unknowingly approaches her castle he encounters strange things. By night he hears the ghostly cry, "Maap!", and sees a white shape moving through the fog, until one night when the air is clear and he sees the ghost for what it really is - an albino deer, it's coat sparkling with phosphorescent spores, that bleats the mournful cry as it grazes. He decides to hunt it down and carry the skin back to the city to dispel the myth.

Catherine, her senses amplified by magic, senses the deer's death. She knew it well, it was almost her pet. In her anger she decides to punish Lang in the worst way possible. She will create a void, a bottomless hole, an empty universe, and cast him in. For eternity he will float through space, alive, aware but unable to escape, lost in nothingness.

As Lang casually heads back to Levinfield, the white pelt lashed across his pack, she works to prepare the spell, cutting and splicing tape in a mad frenzy. The trap works. One moment Lang is walking through the forest, the next he finds himself suspended in the highest room in the castle, an inky black well of nothing beneath his feet, Catherine standing before him triumphant.

And then...? Read on, to find out how they both come to be trapped in the void, how together they escape from the impossible, how they come to find themselves in inner-city Sydney, in a world they have created from their dreams, a world corrupted by their antagonism and twisted by their desperation, a world which, finally, they have to decide either to allow to continue or to destroy utterly.